Mice can quickly invade homes, especially during the fall or winter months. Their search for warmth and food can cause them to take up residence in enclosed areas of your home like the attic and walls.

When these rodents infest your home, they can become a major nuisance, causing extensive damage and putting you and your family at risk for viruses, bacteria and other diseases. 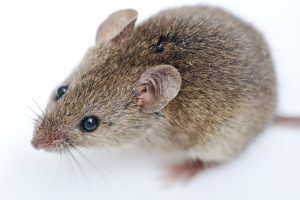 The Appearance of House Mice vs. Deer Mice

There are two common types of mice — house mice and deer mice. House mice are typically very furry and either brown or gray whereas a deer mouse is typically two-toned, brown on back with a white underbelly.

The house mouse is a non-native commensal rodent that has followed humans around the world for thousands of years. This is the most common mouse to find living in your home and attic.

Deer mice (also referred to as field mice or Peromyscus mice) are actually comprised of separate species of native mice, belonging to the genus Peromyscus.

Deer mice are more common in rural settings or suburban areas on the edge of cities. They are commonly called deer mice as their two-toned coloration is similar to that of deer. The name field mouse is derived from their perceived association with grasslands and open fields, despite living in a variety of different habitats.

These rodents differ in size. A house mouse can be anywhere from 2 1/2 to 3 1/4 inches long while deer mice range from 2 3/4 to 4 inches long. Similarly, their tails are two different lengths. The furry tail of a house mouse tends to be the same length as its body, but the hairless tail of a deer mouse is much shorter.

What Do Mice Eat?

Mice are omnivorous, eating things like seeds, berries and insects. When they get inside your home, they will search for and consume virtually anything. They are attracted to food scraps and high-fat foods like cheese, bacon or butter.

Whatever food happens to be easily accessible, you can count on mice to try and chew through and consume it.

Mice can live in all kinds of environments, ranging from forests to fabricated structures. Their natural instinct is to make a burrow underground to stay safe from predators.

With a warm structure and food, mice can live year-round in homes. When the temperatures start to drop, your house is more at risk as these rodents seek out shelter, warmth and food.

With vision comparable to humans, mice rely heavily on their senses of smell and touch. Mice rely on pheromones for social communication and to find sources of food and water. Mice will often follow the pheromone trails of other mice to find their way around; as a result mice will often establish well defined trails between food sources and nesting sites.

Both the house mouse and deer mouse are nocturnal. As such, it is uncommon to see or hear either during the day.

House mice are generally poor competitors with native species and often do not establish large populations away from humans in areas where other small mammals, such as deer mice, are present. While house mice are commensal with humans, deer mice are much less dependent and will generally establish territories 0.75-1.5 acres in size.

House mice are typically afraid of rats, which are known to eat mice. However, if resources are sufficiently abundant population may coexist in a single home.

House mice reproduce fast and are capable of giving birth year round! Under ideal circumstances, a female house mouse may have as many as 10 litters a year. Each litter ranges in size from 3-14 pups. While the young are born hairless and blind, they mature quickly, with female house mice capable of reproducing by 6 weeks of age.

As a result of this high reproduction rate, mice can go from a small, relatively unnoticed problem, to an infestation in relatively short time.

Deer mouse reproduction is not as extreme as that of house mice. A female deer mouse may have as many as 4 litters a year, with litters ranging in size from 3-11 pups. Like house mice, the pups are born hairless and blind. They are typically weened in 3-4 weeks and can become reproductive within 1-2 months.

Both male and female deer mice generally leave their natal site shortly after being weened to establish their own territories. With a lower reproductive rate and higher dispersal, it is less common for deer mice to infest a home as heavily as house mice.

However, if food, water, or shelter is a limiting factor, deer mice will congregate in much larger numbers than normally found under ideal conditions.

Rodents, including house mice and deer mice, commonly transmit diseases that can infect humans. Both species commonly carry and transmit salmonella through their feces and urine. Leptospirosis is also commonly transmitted by food and drink contaminated with the urine of these species.

The house mouse may also transmit Lymphocytic Chorio-meningitis (LCM). This viral disease may be contracted through direct contact with the rodents urine or feces, but is commonly transmitted by simply breathing in dust that has been contaminated by the feces or urine of the house mouse.

Deer mice have been shown to be a primary reservoir for hantavirus, as well as carriers for lyme disease which is transmitted by ticks. Getting rid of the mice in your home is essential to ensuring your home and the people in it are safe and healthy.

Signs You Have Mice in Your Home

There are several signs of having mice in your home. You might notice:

If you have house or deer mice in your home, our team of experts is here to help. Because we are fully insured, we can get into those hard-to-reach places like crawlspaces to get them out.

Reach out today to learn more about our mice extermination, exclusion and cleanup services.